As the years go by the artifacts that are to be found in the Whistle Stop Depot Museum and Ferguson School become more noteworthy to the citizens of Brown County. Each of those items tells a story of long ago. Perhaps it is the artifact itself or perhaps it is the name of the donor that brings an anecdote to mind. As the general population has emigrated from rural America, small towns have lost many of the services once taken for granted. One thing that has not vanished is the unique history of Brown County. Our past is celebrated in these historic buildings on the Fairgrounds.

During the Fair, there may be moments that you choose to meander through the basement floor of the museum to momentarily escape the heat and the crowds of the fairgrounds. One of the many things that you might see is the old red coffee grinder used for many years at the Givens Store and donated by the late Judge Al Pezman and his wife Cleora. The Givens store sold coffee which they ground under the brand name “Ask Your Neighbor”.

Another fascinating display was donated by Rick and Jim Jones, sons of the late Bud Jones, noted blind trick rider from Brown County. With the saddles, you will also see Bud’s Braille books and a hammock that he made while in Jacksonville at the School for the Blind. Every bit as amazing as his trick riding was the barn that he built at his home at the North end of Capitol Ave. Bud salvaged lumber from the old Floral Hall on the Fairgrounds after that structure was destroyed in a tornado in 1966. He then constructed a large barn for his horses, adjacent to his home. The barn built by the blind man still stands today. 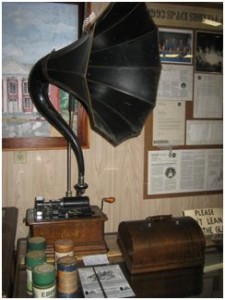 An often overlooked item is the Museum’s early “record player”. In an almost mint condition, it has been removed from the display and assembled so that its beauty can be appreciated. Donated by the late Phyllis Morellion of Mt. Sterling, the machine is a classic Edison Gramophone with the famous “morning glory” horn. Sold from the early 1880’s until shortly after the dawn of the 20th Century, it played music recorded on hard wax cylinders, instead of the records we knew so well from our youth. Only the most gracious homes had such a machine to entertain all. 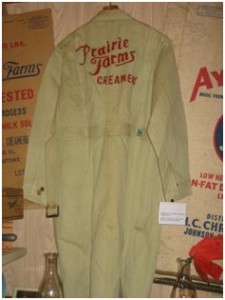 Bringing Mt. Sterling and farming history alive for many of our older residents is the Producers Creamery coat on loan from the family of the late Glen and Dorothy Egbert. “The Creamery” as it was commonly known grew out of the cooperative marketing pools of the Illinois Agricultural Association of the 1920’s. Our creamery co-op was created by the efforts of Tom Jackson in the early 30’s and launched into a full production in 1934, buying milk from members and producing dairy products. Equally important to the young people of the County, the Creamery opened a Dairy Bar in the front part of its building (now the Franklin Apartments) by 1945. It became the teen hangout. The Creamery gave employment to quite a few local residents. The coat on exhibit was like a uniform. The entire operation merged into Prairie Farms of Western Illinois. The most important significance of Prairie Farms to Mt. Sterling, Brown County, and Western Illinois is the fact that young Robert Tracy came here to work for Prairie Farms. He and his wife, Dorothy, went on to found their own company which eventually became DOT Foods. 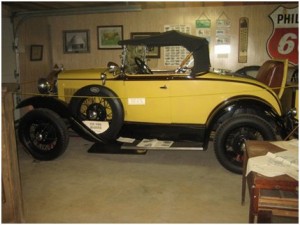 No trip to the lower level of the Museum is complete without a view of the 1931 Ford Model A Roadster Coupe, lovingly restored by Mr. Jim Tice. Currently on loan from Jim, the automobile appears just as it rolled off the assembly line at the Ford plant in Detroit. The basic Model A costs the buyer around $400.00. It had an L-Head water cooled 4 cylinder engine, which delivered 40 horsepower. Top speed – 65 mph. 1931 was the last full year of production for this model. If you are of an age to have been a fan of the TV series “The Waltons”, you saw any number of people travelling in Model A Ford cars. Mr. Tice visits his “baby” nearly every other week, checking air pressure and hand turning the engine. With just a few minutes effort it would come to life, and with engine purring, roll out of the Museum and onto the highway – more than we can say about the old REO Fire Engine behind it.

Our history is alive and the storytelling is thriving. The past two years the Society has sponsored story telling sessions for the public. The latest was the Hobo Dinner and Storytelling at the Fairgrounds. Jim Jones was on hand to share stories about his father; Allen “Oop” Campbell, grandson of Al Curry, longtime stationmaster at the Wabash Depot, shared family stories; Ed Teefey led an interactive storytelling session about the history of the Fairgrounds and horseracing in Brown County, while Becky Barlow regaled the crowd with the story of her grandfather’s eight legged lamb. The evening’s festivities were complete with fiddlers from Griggsville, Charles Shafer and Cleve Curry. This year will also mark the occasion of the Sixth Annual Cemetery Walk which will feature storytellers at the Cooperstown Cemetery on Sunday, September 9th. Mark your calendar, because you need to be there to learn more about the pioneer stock that were the backbone of our County. 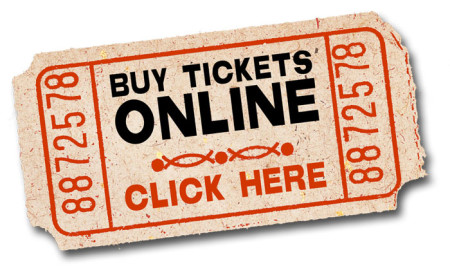